The language of the proposed ordinance lacks teeth and provides a huge amount of wiggle room. In my opinion, as a former business owner, it’s actually quite favorable to a driller – that is unless he’s encumbered by high principles and scruples.  I’ve marked up the linked copy to highlight specifics. Before discussing these, let’s look at the context in which they will come into play.

The driller is likely to be a limited liability corporation (LLC). This means just what the name implies. The corporation exists to shield its owners from otherwise unlimited liability for the risks of the business. The street savvy owner can pour just enough money into the LLC to conduct operations. When things go wrong, the LLC can be allowed to go bankrupt. But if things go well, the cash generated flows to the owner(s).  Banks know this and they generally require the owners of such a business to personally co-sign for loans.

The municipalities and the public has no such protection. Even if Exxon-Mobil, with its vast resources were backing the LLC it would be extremely difficult if not impossible to collect more than the assets of the drilling LLC.  Financial responsibility is thus a really big concern.  The proposed ordinance has provisions for a bond ($50,000) and unspecified liability insurance, but neither of these is sufficient protection considering the massive risks and likelihood of leaks, spills, and fires.

There is always expense involved in enforcement.  With an operation like well drilling and fracking, much of the work is conducted out of sight using practices and procedures unfamiliar to regular code enforcement personnel.  Violations can easily go undiscovered until irreparable harm has been done and/or a disaster brings them to light.

The proposed ordinance has a lot of language that requires subjective judgment. You can bet that a driller will insist on the most lenient and cost efficient interpretation.  It will be up to the enforcing authority to decide if they wish to spend the money to litigate.  Litigation is a slow and deliberate process with many opportunities for delay and diversion. 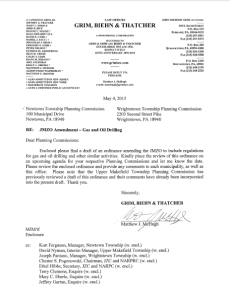 The court docket’s always crowded, and the best lawyers bill their time $300, $500 or more an hour – and yes, you do need that level of talent when stakes are high.  Justice has a very high price, even if you are the government.

I recommend that you see for yourself.  But here are my observations and objections:

There’s more, but this captures the essence of the criticism.  One telling aspect of the proposed ordinance document is the fact that the specifications for the chain link fence for the site are more lengthy and detailed than the noise or pollution provisions.

[This post was updated to incorporate suggestions and corrections from Betty Tatham.]