You would think that a non-profit organization with a name like “American Council on Science and Health” with a slogan like “Science, Not Hype” would be one of those bedrock watchdogs of rigorous truth. But not in today’s world of disinformation. A couple of weeks ago my wife Marguerite received a nine-page single-spaced letter from Hank Campbell, the President of that organization. He was pitching his role as “the only organization in the nation” that could defend “the remarkable benefits of science in our lives.”

Yes, you read right, nine (9) pages. Ed Mayer, who wrote the book on junk mail, said that a letter couldn’t be too long, just too boring. A nine-page letter asking for a $1,000.00 contribution has got to be really good to work. This one is, but not in the moral or ethical sense. It is cleverly and artfully crafted to deceive.

A Sophist argument is one that connects the dots to lead you to a false conclusion. Campbell’s letter does just that. But if you check out the history of the organization, you find that they have been champions of self-serving industry sponsored pseudo-science. The tobacco industry is mentioned prominently in connection with them. It would appear that this think-tank is really an advocacy voice for beleaguered energy companies and others who find real science inconvenient.

The letter camouflages this by discussing the discredited anti-vaccine activists. But it segues to GMOs and the alleged excesses of government regulatory agencies. In the end, reading carefully, you see the intent.

Marguerite gave me the letter thinking it was pro-science. I’d bet that with science under assault by the Trump administration, the intent of the letter is to draw the uncritical reader into thinking their support will provide some rational and balanced approach that steers a course between shrill-voiced hysteria like the anti-vaccine activists, and the allegedly self-serving bureaucratic regulators who choke off progress.

But this group is no friend of objective scientific rigor and the search for truth. Quite the opposite. They are in the business of putting lipstick on pigs.

See for yourself. Here’s the letter. 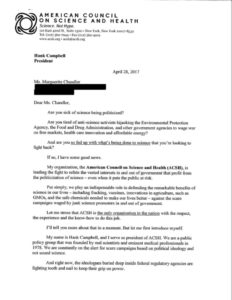 Google it for more…

An Inconvenient Sequel
Food and Water Watch Phone in