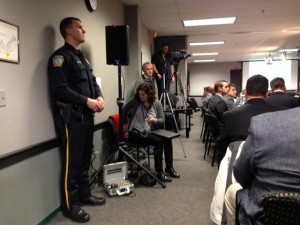 Infrastructure Task Force was well covered by the Media

I attended the October 28th meeting of Governor Wolf’s Infrastructure Task Force. It was conceived in an attempt to harmonize the development of pipelines needed by the shale gas industry with Pennsylvanian’s fears and concerns about the impact of pipeline and compressor station construction. Steamfitters are needed to weld together these pipelines because each pipeline is a huge pressure vessel miles long that is capable of exploding with disastrous consequences. Construction requires that huge linear tracts of land be cleared and excavated, often by legal condemnation and taking against the will of the property owners.

I recognize that most such task forces are created as a delaying tactic by politicians. They often labor for years, grind out a great tome of a report which few ever actually read except to capture an occasional media sound bite. Not this task force. It has been completely co-opted by shale gas interests and is functioning as a boot camp to forge the access and relationships between regulatory personnel of the Federal and State governments and their industry counterparts. Hundreds of “volunteers” (people from industry) have been working with government employees to draft the task force report that will make recommendations intended to expedite the construction of a vast grid of collector and transmission pipelines slashing through every county in Pennsylvania. One gets the impression that the agencies that protect our forests and streams, our historical sites, our game and wildlife, and our property rights are seen as inconvenient impediments.

This taskforce has moved with an alacrity that is rare indeed for a government undertaking. Its draft report is due in November, and its final report in February 2016.

The Marcellus shale gas boom has created wells that need pipelines to get their product to market. Those who build the pipelines see a decade of steady, lucrative work ahead. Those who own wells with no connection to the grid desperately want to begin recovering their invested capital. This has created a blindness that I have seen before in the real estate booms that happened over my 35 years of running an industrial park development. Toward the end of each boom cycle there are always investors and developers that arrive late to the party and are just getting started as the band stops playing and everyone goes home.

In the 1980’s when I was new to the business I went to a lot of industry trade shows to learn my way around and rub shoulders with other more experienced investors. I recall having conversations with developers who were still starting new projects when there was a vacancy rate of 35% in existing office space. I was puzzled at how they hoped to succeed when the demand for space was so low. In most of my conversations the developers told me how their building had features like wiring for computer networks that would make it much more attractive than the competition. I wasn’t convinced.

The real answer was at last revealed when one of these men saw my disbelief and whispered, “Besides, the bank is our partner!” By this he meant that most of the skin in the development game is not the developer’s; it’s the bank’s. Those who build the buildings arrange financing through banks and third parties. All through the construction these developers are paying the bills, and themselves, with other people’s money. If the completed building sits vacant, they have already made most of their money and the financial risk is on the investors. Donald Trump famously said, “If you owe the bank $100,000 you’re in trouble. If you owe the bank $100,000,000, they are in trouble. A builder meets his payrolls and keeps the doors open despite the lack of demand for the product, so long as financing is available.

The carbon fuel party is just about over. Science has been telling us for years that we have stayed too long and it’s time to move on to renewable energy sources. Global warming is real and we are witnessing the disruptions to weather patterns and ocean currents in ever more dramatic ways. Hurricane Patricia, the category 5 storm that broke all records for intensity was only the latest example. In science, proof lags awareness by years. So we anticipate more and worse consequences coming from our reliance on fossil fuels, we just haven’t proved them yet.

Those who drill wells and build pipelines are not ready for the dance to end. Like my colleagues in the real estate business, they plan to keep it going as long as they can. They just don’t (or won’t) see what’s coming, and besides the bank is their partner.

In addition to climate change there are other clear signals that the shale boom is over. Gas production already exceeds domestic demand, prices are low for gas and oil. The higher prices that accelerated the shale gas boom are over. Producing more gas at a faster rate will only make the global price drop more. Far too many shale gas developments world-wide are driving prices down. Cartels in the Middle East have responded to the competitive threat posed by shale gas with price reductions calculated to make new fossil energy production unprofitable.

These low prices have already put the damper on new exploration, and made the finances of shale gas developers shaky. The have had a negative effect on renewable energy as well, but  renewable technology continues to advance and become more competitive in spite of cheap carbon fuel. Entrepreneurs like Elon Musk (Tesla) recognize that the renewable party is just getting started.

Soon the global effects of carbon fuels will be undeniable. Governments will impose carbon taxes and other remediation measures in an effort curtail use and mitigate the damage. These measures are already too late to prevent dramatic changes in fresh water availability, sea level, and oceanic biology. Species that can’t adapt are already vanishing. Humans can migrate and will find ways to survive the changing environment, but one would be foolish to think that the adjustments will happen without hardship and strife. Consider the heat wave in Pakistan where temperatures rose to 110 degrees Fahrenheit, killing those who could not tolerate the heat or find shelter from it.

There will be unprecedented famines. The fresh water our generation regards as a birthright will become a valuable commodity in commerce. You’re skeptical? Thames Water and other large multi-nationals are buying up water systems globally.

Race for the Abyss

The people seated at the Infrastructure Task Force table are racing to build their pipe network because there’s money to be made while the band still plays. The long-term costs, both economic and social are not their concern. Each individual is a player in a game that pays too well to quit. As consultants or employees they don’t have the motivation to say, “Hey, we shouldn’t be doing this.” The CEOs of their companies, aren’t likely to call for a halt. The undepreciated capital investment it too great, and it still looks possible to keep on dancing. But those who finance them are getting shy. And those of us who see what’s coming are divesting from fossil fuel stocks. 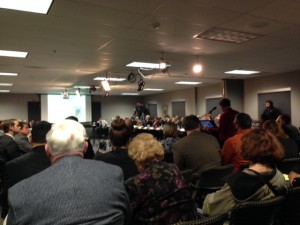 All of the public comments were critical.

I was given only two minutes to speak at Wednesday’s Infrastructure Task Force meeting. There wasn’t time to paint the picture as I have here. I could only summarize what I have seen and conclude with an old man’s warning that the carbon bubble will break and that they will be telling their children or grandchildren “I just didn’t see it coming.”

Could Global Tide Be Starting To Turn Against Fossil Fuels? – Yale Univ. School of Forestry

2 thoughts on “Arriving Late to the Carbon Party”