That’s right, Pennsylvania has about 200,000 abandoned oil and gas wells and doesn’t know where 96% of them are. 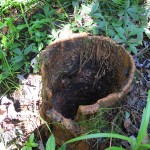 We also don’t know if they have been plugged. This is a problem when new wells are fracked because the old wells can be an open conduit between the newly fractured strata and other layers or the surface. The gas migrates into drinking water or into buildings where it can explode.  Abandoned wells are only one of may ways that gas and oil can migrate from a well site, but they have produced spectacular leaks, and frightening consequences.

StateImpact, the NPR series on shale gas, has a series of articles dating back to 2012 that document the surprising lack of record keeping and oversight that characterize Pennsylvania’s inept management of drilling over the years. These old wells are costly to locate an plug, and the state is hampered by limited funding.  As you might expect, those who profited from these wells were not and are not accountable for the problems they left behind.