Zoning is seldom easy. Those who must decide about land use are usually picking winners and losers and it’s certain that someone will get hurt and go away mad. The stress is usually made tolerable by a shared vision of a community that’s pleasing, healthy and safe to live in with economic prosperity for all. But a Fracking well is not like a water well.  Fracking poses real danger and not just the ordinary nuisance or aesthetic issues that land use schemes normally address. Big money is in play and Planing Boards and the Supervisors they advise are confronted with pressure from many sides.

This decade has seen a battle between large gas and oil drillers and local communities. There was the disaster of Dimock, PA that drew national attention and was the subject of the film Gasland. The PA Legislature passed Act 13 (2012) stripping local municipalities of zoning control over fracking. Several municipalities sued and the PA Supreme Court ultimately declared that all municipalities have a duty to protect “clean air and water” and to preserve “natural, scenic, historic and esthetic values of the environment.”  But according to Tracy Carluccio of Delaware Water Keeper, “Fracking can’t legally be totally banned …”

It’s Not Pretty and It’s Not Safe

Few, if any, of our officials are experts on fracking methods and practices. Nor are they familiar with the dangers. Indeed, some health hazards like increases of Radon gas are just now being measured and documented. The US EPA study on fracking and water quality raises far more questions than it answeres.

Of 1071 of the chemicals known to be in fracking fluid, only 60 were included in the study.

The selection of the 60 out of the 1073 identified fracking chemicals was based on a number of criteria.  Most were excluded because there was no standard of toxicity established for them. In other words they did not know how toxic most of the fracking fluid ingredients were, so they made a list of them and put it in an appendix to the study.  Admitting that “hazard evaluation could not be conducted,” they simply noted that these should be evaluated in future studies.

EPA only studied a subset of those few chemicals on which they had toxicity information.

Those who only read the Executive Summary might miss the key fact: they were only talking about 60 chemicals out of more that 1000 possible pollutants. The other potentially hazardous stuff they found was simply listed and left as an open question. The study points out that the technology is still evolving, the ingredients used are secret, and that innovation changes the brew more or less continuously.

Is it reasonable to think that our municipal officials are up to the task of sorting all this out? There are still too many unknowns. Regulation and enforcement becomes a technological quagmire.  If a spill happens, how serious is it? What response is needed? Do you require test wells and monitoring?  What do you monitor for? How do you remediate? What are acceptable levels? If you knew that your water was tainted with one or more of 1000 chemicals not known to be safe, would you let your kids drink it?

What we don’t know can kill us.

Someone suggested that large tracts already blighted by something like a quarry might be zoned for drilling thus satisfying the state’s mandate not to ban fracking, but still keeping it as far as possible from people.  If air and water respected property lines this might seem reasonable.  But they don’t.

Groundwater travels many miles under the surface. Whatever is released into the air moves with the wind. There is growing evidence that a buffer of thirty miles may not be enough. Among the concerns are low birth-weight babies, birth defects, and increased respiratory disease (see Links page for reports).  These are like the canary that miners once used in mines. The bird succumbs before the less fragile miners sense the presence of the suffocating methane.  Problems in pregnancy are, like the dead canary, a warning not to be dismissed. 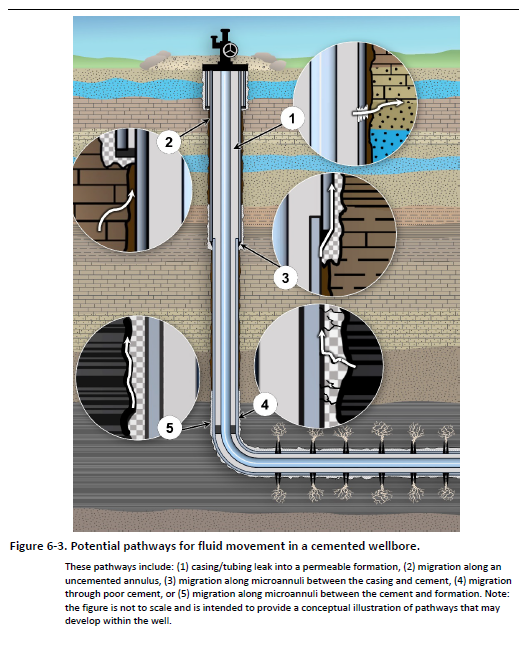 This illustration shows how fluids can migrate where a well penetrates the earth. (US EPA)

The above illustration shows how a fluid, including vapors and gasses, can migrate along a well casing.  Note that the casing goes down to the shale layer and then turns horizontal.  These horizontal well casings can be bored to extend one, two and even four miles from the vertical shaft.  They can radiate from a site like spokes of a wheel. Half a mile down, out of sight, gas wells cross property lines and even municipal boundaries.

When a house is built, the municipal building inspector can and does hold up construction until he/she can inspect the footers, the framing, the plumbing, the wiring, and so on.  With a well there is no such opportunity.  If it’s done wrong you can’t really tell – at least not until the damage becomes evident from the surface.  How do you proactively regulate that? What does the municipal code official know about fracking wells?

Fracking is a Big Deal

A drilling zone is not just a routine land use issue. Business as usual will not suffice to protect the public and preserve our quiet enjoyment of hearth and home.  The presence of a fracking operation anywhere in Bucks County can affect much more than the neighborhood or town; everything downwind and downstream can be compromised. In addition fracking brings traffic that pulverizes roads, pipelines that slash through neighborhoods, emergencies that first responders are not prepared to meet, and a deteriorating bore hole that can allow nasty stuff to creep up into the shallower levels of strata and even the water table.  For the drilling company, these are all “externalities.” They aren’t part of the expense model. They are left for the municipality to deal with.

The municipal supervisors are tasked to zone, regulate and police all of these fracking complexities for our common benefit. The State? It took a Supreme Court decision to get back any say in the matter at all. And the Pennsylvania legislators seem unwilling to limit the gas industry because of the money it promises. Enforcement of State regulations may depend on the politics of the current Governor.

The drilling moratoriums expire in 2018. Gas prices are low enough to ease drilling pressures. So we are in the lull before the storm. Even so, I don’t envy our officials as they grapple with these matters and try to remain true to their charge to protect our air, our water, our environment … and our lives.