The Trump Administration is loath to admit that climate change is real and is man-made.  I was surprised to see this article in WaPo this morning. One can only hope that the weather extremes and related human catastrophes have become too horrendous for denial to persist as a viable strategy for fossil-backed politicians.

I should not need to explain why this is relevant to fracking, but I will. Fracking and the pipelines that bring its products to market disrupt the lives of those in their path, damage air quality, pollute the water, and consume precious freshwater resources. Energy producers seek to justify the use of our government’s sovereign powers (land condemnation, permitting for pollution, etc.) on the basis that it is a public necessity akin to highways and railroads. Clearly, this is not the case in Pennsylvania. There is a glut of natural gas produced and distributed by thousands of existing wells and about 50,000 miles of existing pipelines. Moreover, the products produced by the extraction of this fossil energy will produce MORE GLOBAL WARMING. And, because they are so cheap, they will discourage the development and deployment of renewable energy.

Pennsylvania is deeply and corruptly enmeshed with fossil energy interests. There is a bill pending, SB652, to make pipeline protests a felony on a par with assault.
Keep in mind that the products pipeline interests want to bring to market should be kept in the ground for the sake of our children. Not only do they damage health, but their use anywhere on the planet will destroy coastal real estate and much of Florida. Pipelines use government power to take private land for private use.
Nothing good comes to those in their path. So there are lots of excellent reasons for activists and property owners to risk jail. The pipeline interests want to up the ante.
https://mailchi.mp/dfaa9d242dd6/harrisburg-update-bills-to-oppose-when-state-house-resumes-1615329
Don’t be silent! Call your rep. 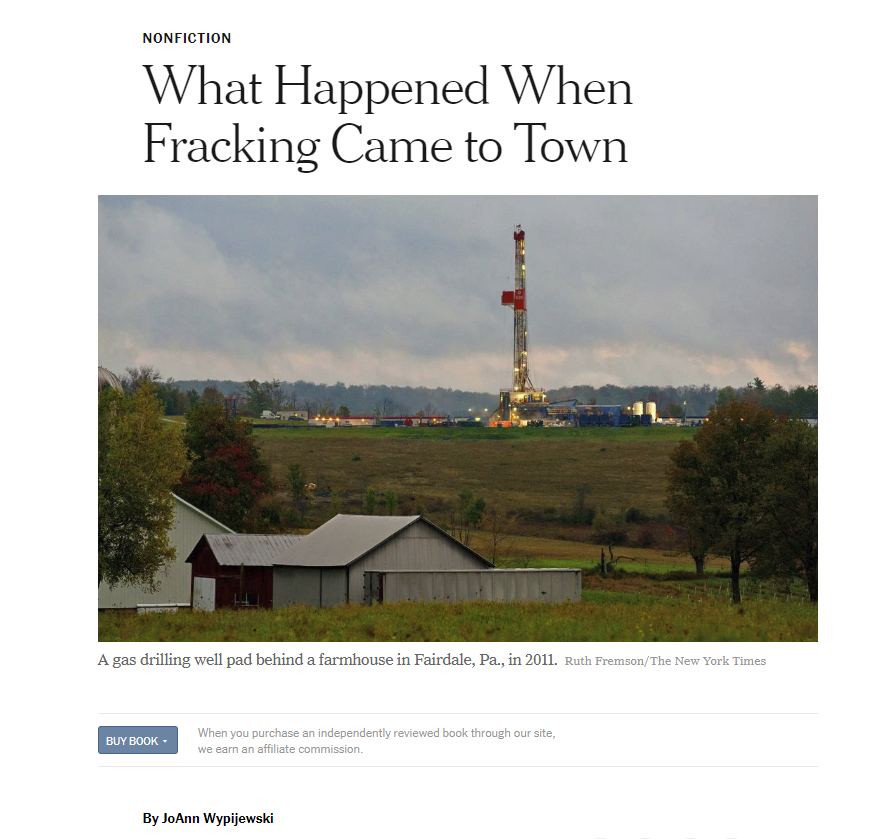 This is not news to followers of this blog, but we applaud the telling of the tale of misery and exploitation of ordinary Pennsylvanians. Click through and read the book review, buy the book, and send your comments to your PA legislators.  It is the politicians who have enabled this travesty. They need to know that we are fed up with the corruption, self-interest, and abuse.

What’s gerrymandering got to do with Fracking? Everything.  They, the legislators, don’t listen to you when you protest fracking because they don’t have to. The are safe and secure regardless of how you vote. Here is Jim Greenwood explaining why…

Not part of FDPA?  Check it out and meet people, both Republicans and Democrats, who are dedicated to having our democracy represent We the People.

Read the article in the Courier Times today. You’ll not only get a great overview of what’s afoot here.  You will gain an important lesson in the down and dirty world of money and influence in government.  Ostensibly, it’s about a ban on fracking in the Delaware Basin. but the DRBC decision was to propose rule-making, not ban fracking.

Between now and November, DRBC staff will be drafting language for regulations to govern not just drilling operations, but also the taking of water from the river to be used in fracking and also the disposal of the contaminated waste water.  Our watchdog groups like the Delaware Riverkeeper Network smell a rat. The general public has no opportunity for influence until the proposed regulations are written.  But the politicians and lobbyists will be hard at it, working to influence the phrasing and content of those rules.  We’d like to think that common sense and science would prevail.  But that is rarely the case. it will be very difficult for We the People to be heard in this process.

Courier-Times Photo of the Crowd

Stay tuned.  If you snooze, we lose.

The Delaware River Basin Commission is a regulatory panel that decides what may be removed from or discharged to our Delaware River watershed. Members represent the United States (Corps of Engineers), New York, Pennsylvania, New Jersey, and Delaware. Each entity has a seat at the table and a vote.  But the individuals, the people who sit in those powerful chairs do not vote based on their personal conviction or discernment.  The speak and vote for each of the Governors, and the President of the US. 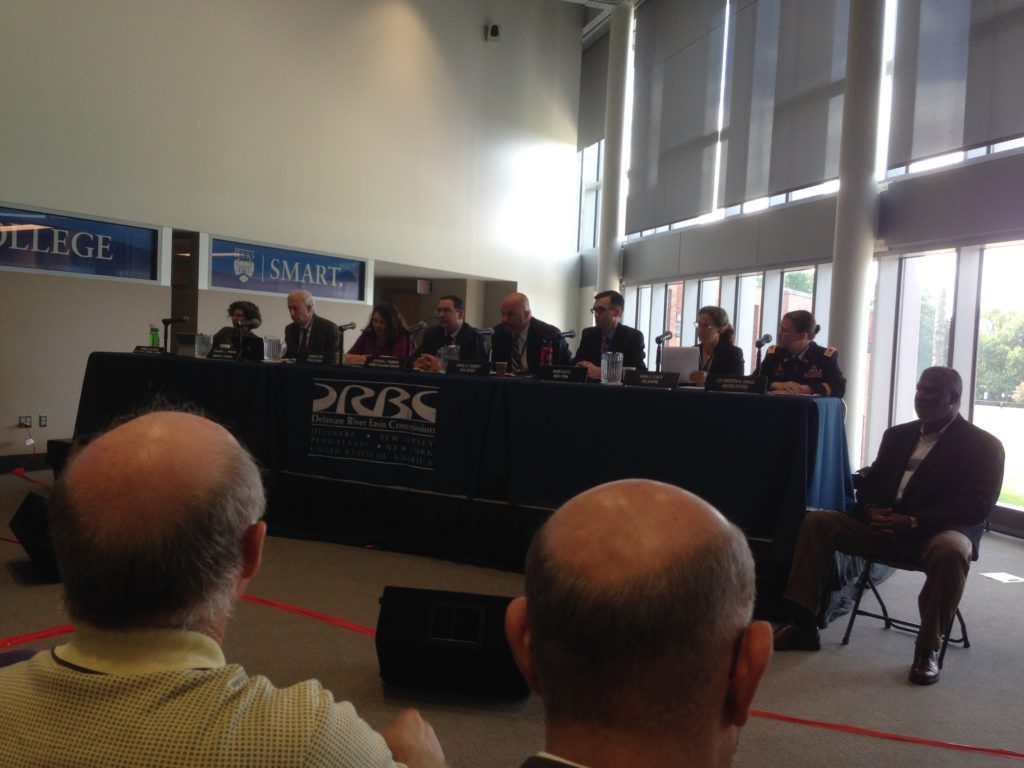 Sure, most of the routine permitting of water companies and waste treatment operations is left to the staff these board members oversee.  But issues like fracking are highly politicized. Lobbyists and industry lawyers make it their business to influence the policy that determines how these board members decide things.

The tension was palpable when the Colonel representing the Corps of Engineers voted against the motion that directed the staff to draft rules banning and regulating fracking in the Delaware River Basin. Everyone knew that she was following her orders and had no discretion whatever.  As the roll call proceeded, other panelists made it clear that they too were speaking for those in higher authority.

As a courtesy to the many concerned citizens present, the panel permitted a public comment period after the meeting adjourned.  It was not on the record, and it would not be heard by the real decision makers unless those who sat on the dais were extraordinarily committed to reporting the passion the various speakers expressed.  These commissioners, many of the second or third alternates for the primary commission members, were there to take the verbal punches and try to remain civil and be cordial sparing those for whom they are surrogates.

If any one of them experienced themselves as guardians of a public trust, the moral injury they personally sustain should earn them a medal.  When a person is ordered to do something that violates their deeply held moral and ethical convictions, when such an order comes from one who has absolute authority over the person, and when the stakes are very high, doing that abhorrent thing tears at the soul of one’s humanity.  It’s a high-risk job if you really care about doing the right thing.

There will be enormous pressure for the DBRC to create loopholes and wiggle room in the regulations so that the energy industry can drill their wells and build their pipelines.  The process will happen without public scrutiny, except when leaks happen. Insiders and influence peddlers will seek to influence the phrasing and the content. Political deals may be made. And, when the proposed rules are finally published and opened for public comment, it will be damned hard to get any meaningful changes adopted.  Why? Again, because the people in those chairs listening to the public are not empowered to vote using their discernment and conscience – they will be under orders decided by a political bureaucracy and given before the hearings even begin.

The Pope speaks about climate change and morality …

Big news: we just learned that in 5 days there will be a vote to help establish a ban on fracking in the Delaware River watershed for good. 1

With 289 confirmed cases of people’s drinking water wells contaminated by fracking in Pennsylvania, we can’t risk the drinking water for the 15 million people who rely on the Delaware River. 2

The frackers are already railing against news of the vote by spreading misinformation and lobbying the Governor. That’s why he needs to hear from thousands of Pennsylvanians in the next few days to make sure this passes.

Eight years ago we helped flood the governor’s office with public comments in support of the first moratorium on fracking in the Delaware River Basin. Since then, it’s become only more clear, as fracking companies in PA have violated environmental and public health protections over 4,000 times in other parts of the Commonwealth.3

And so for eight years, we’ve kept our drinking water safe.

This new policy would permanently commit environmental regulators to keep fracking away from the Delaware River, giving all of us peace of mind that our water will always be safe from fracking’s cocktail of toxic chemicals. Add your name for a ban on fracking near the Delaware now.

You can be sure the fracking industry will fight this effort over the next few days, but with your support we can protect the Delaware.

P.S. Help us build even more support for protecting the Delaware by forwarding this to your friends and family!.

Ask your representative how “Demolishing the DEP” budget bills serve the public interest. 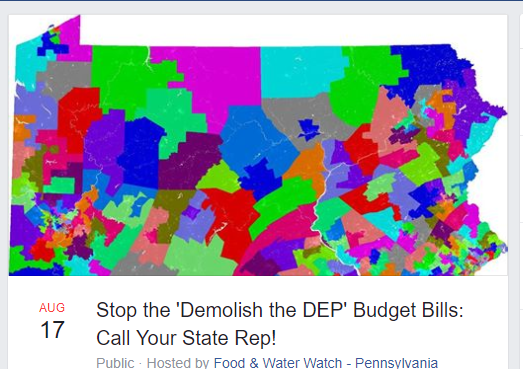 Food and Water Watch has the details (click link) and is organizing a statewide call in on August 17th.  http://fwwat.ch/ProtectDEP.  Don’t let this legislation happen!

You would think that a non-profit organization with a name like “American Council on Science and Health” with a slogan like “Science, Not Hype” would be one of those bedrock watchdogs of rigorous truth. But not in today’s world of disinformation. A couple of weeks ago my wife Marguerite received a nine-page single-spaced letter from Hank Campbell, the President of that organization. He was pitching his role as “the only organization in the nation” that could defend “the remarkable benefits of science in our lives.”

Yes, you read right, nine (9) pages. Ed Mayer, who wrote the book on junk mail, said that a letter couldn’t be too long, just too boring. A nine-page letter asking for a $1,000.00 contribution has got to be really good to work. This one is, but not in the moral or ethical sense. It is cleverly and artfully crafted to deceive. END_OF_DOCUMENT_TOKEN_TO_BE_REPLACED

In the frightening denial of reality we are seeing in Washington, and with the State of Pennsylvania acting against the interests of local communities and individuals this film will be a timely reminder of the grim facts.  America and the world can not delay the transition to non-carbon energy sources. Delay has terrible consequences for everyone, but especially for those already surviving at a bare subsistence level.