Let’s stop this “give-away” to the Mining and Fracking Industries.
Call or write your State Representative.

SB-875 Amended 7.22.15 has been amended and has progressed 50% thru the PA Legislative process (it has already passed the State Senate). It is now in the House Appropriations Committee. Most likely our elected representatives will try and get the bill approved when the budget is considered in late August. Please send an e-mail to your State Representative (using your own words). If possible, add a sentence or two about being a constituent, and then ask for a “NO VOTE” on SB-875. Bucks, Chester and Montgomery Counties may be especially pivotal.

Additional talking points that you can add re: Treated Mine Water Bill SB #875 (i.e., “treated mine water” means using acid coal mine drainage water for oil and gas drilling)

• Exempting acid mine drainage water from the Solid Waste Management Act removes safeguards to PA’s drinking water
• Exempting anyone from liability when using, transporting or storing what is now considered a “hazardous substance” could lead to reduced caution and therefore harm to people, animals, crops and/or bodies of water. Unborn and small children, the sick and frail elderly people are most vulnerable to toxins in air and water.
• There is no evidence that treated mine drainage water can be made safe for oil and gas extraction purposes.
• Mine owners are exploiting a loophole that allows fracking operations to be exempt from the federal Clean Air and Clean Water Acts.

For many of those newly concerned about fracking the amount of information is overwhelming. Hundreds of very good sources exist, and there are hundreds more that are just shrill opinion or propaganda. It’s a chore to sort through it all. I’ve been focused on this for three weeks pretty much full time, and I still find surprising new information.

Food and Water Watch report on Fracking. (click to view)

One of my recent finds is this report by Food and Water Watch, a credible source.  The report offers a  comprehensive overview and an impressive listing of end notes (320 of them) so scholars and skeptics can check sources. 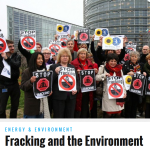 Another survey article appeared in Law Street and lists source websites the author used while attempting to write a balanced pro and con review of fracking.

Yesterday (July 20th) I updated the homepage of this site by adding a summary of the fracking issues of specific concern to our area of Bucks County.  Although the content is not new, it was scattered in various posts and links on the site and wasn’t a quick read.  Page one gives a quick overview and the “read more” drills down for more detail. (pun intended.)  It’s a work in process and I will be adding illustrations and links to enrich what’s presented there.

The video portfolio on this site has excellent animated graphics to help you understand and the fracking tour presents actual photographs of all stages of the process so you see the impact on the land and the community.

Thanks to all those who have been emailing links and articles. I now know more than I ever wanted to.  But don’t stop. It all gets noted and saved.

I have spent some time reading pro fracking information to see what I might be missing. There is a lot of very well designed material that’s clearly the product of a professional ad agency. It stands in sharp contrast to the scientific and news sources. Few items have a named author or actually cite sources. They seek to convince the way advertising does with crafted language and phrasing that glosses over the inconvenient facts.

By contrast, the science discusses the limits and uncertainties. It cites sources and explains how the authors arrived at their findings, and the articles appear in journals and publications that are reviewed by informed peers.

The advocacy literature unabashedly presents a viewpoint and often uses language that characterizes the drillers and the energy industry negatively. But the big difference between the ad copy and these activist articles is that the authors put their personal and/or orginazitions’ names on the product. Most quote authorities by name and cite print sources.  Although they are making a case, there is no pretense otherwise.

Notes from the 7/7/15 Briefing at Newtown Friends Meeting

“Attorney Matt McHugh of Grim, Biehn and Thatcher in Perkasie said the ordinance [to create an gas & oil fracking zone in Wrightstown, Newtown Township and Upper Makefield] will likely be voted on by all three governing bodies in the next month or two.” (front page news, Bucks County Courier Times 7/7/15)

Tonight 70 people gathered at the Newtown Quaker Meeting to hear about this proposed ordinance. Some key points emerged:

After the meeting at the Newtown Quaker Meeting, about 100 people attended the Newtown Township Planning Board meeting. At the end of the public comment period, the Chairperson urged us to communicate with the Township Supervisors who have the power to make the final decision.

Check the coverage in the Bucks Courier-Times (you may need to subscribe ($1 promo), to see the whole article.)

I don’t believe that the gas and oil industry intends to destroy our quality of life and our communities. This industry provides a good yield for our pension funds and portfolios—and makes a decent return for their investors. They provide fuel to keep us warm in the winter, fuel to power our electronic devices, fuel to drive our cars to the grocery store and our children to school, fuel to transport food from faraway places so we can enjoy strawberries in Dec. in Pennsylvania. They provide the fertilizers to grow our crops. They provide “mail box money” for landowners who allow them to drill on their properties. They provide jobs.

In fact our current oil and gas industry is a marvel of ingenuity. What was once a single oil well is now a shaft that can go miles vertically into the earth, with radial arms that turn and run horizontally for 2-4 miles. Who could have imagined such a thing even 10 years ago?

Another high performing profit sector is the chemical industry, which has created chemicals for all sorts of useful purposes. According to the EPA, there are more than 64,000 chemicals that have been created and are in use, chemicals that have not been tested for toxicity and that can be combined in countless new ways. Fracking wells can use a combination of up to 1,000 of these chemicals. All but 60 of these were essentially omitted from the EPA study released in June, 2015.

But what isn’t accounted for are the unintended consequences that are externalized to the surrounding community.

Some people think that these impacts are just the price of doing business and enjoying the high quality of life we Americans prize, but people around the world are discovering that greater opportunity and innovation is available from “clean energy” industries like wind, solar, battery storage, and permanent, safe jobs like retrofitting homes and businesses and installing clean energy equipment. One small city in Southern France discovered they could generate more than $3 million/year with just a few wind turbines.

Most people believe that costs should be borne by the companies responsible for creating them, not left for the property owners or taxpayers to pay through their taxes or impacts on their health. As a nation, we are currently subsidizing the fossil fuel industries compared to renewable energy industries by a factor of 5:1. We, the people, have made a Faustian bargain. We can still make a new choice.

There is already national, bi-partisan legislation being considered that could allow a predictable, incremental transition from fossil fuels to clean energy sources over a 10-year period. This can be achieved by adding an increasing annual fee to every ton of CO2 at the source and returning all the revenues to American taxpayers on a monthly basis, much like the Home Energy Subsidy that Alaskans currently enjoy.

Wind, solar, and biomass already generate 2.5 – 9 times as many jobs as coal, oil and gas (for every $1 million contribution to GDP).  Independent studies show that a Carbon Fee & Citizen Dividend would create more and better jobs (2.1 million new jobs after 10 years), increase GDP by $70-$85 Billion from 2020 on, and save 13,000 lives per year after 10 years due to decreased emissions and improved citizens’ health.

So we have a choice. Bucks County is temporarily protected from oil and gas drilling until 2018 under the Delaware River Basin moratorium. We don’t have to open a door, that once opened, we can’t close. Let’s remember the admonition that we are our brother’s keeper, and that allowing gas and oil drilling in a neighboring town will affect us as well.

Bring your children, your neighbors, your friends to two critical meetings:

– the Newtown Township Planning Board will meet to discuss a resolution to allow fracking in Newtown Twn. (Rt. 413, off Durham Rd.)

Wed., July 8 at 7pm – the Newtown Township Supervisors will meet to hear the recommendation of the Planning Board and vote on the resolution.

With the out-sized influence of the fossil fuel industry in PA, with the predictability of human error, with the inevitable escape of methane gas during drilling, extraction and abandonment of wells, there is no sure way to regulate fracking’s impact. The proposed resolution makes clear the risks involved (to use the language of the resolution)

It doesn’t mention other known risks:

The price for this irreversible damage? “A letter of credit or other financial security” approved by the governing body “BUT NOT TO EXCEED $50,000.” Litigation to enforce would cost more.    Remember, once any ordinance is passed, it can be amended at any meeting, so the language of the law is not much protection even if air-tight .

On Dec. 20, 2013, the PA Supreme Court ruled that municipalities “must act as trustees to protect the rights of PA citizens” to “clean air and pure water” and the “preservation of natural, scenic, historic and esthetic values of the environment.” STAND UP FOR OUR QUALITY OF LIFE AND OUR CHILDREN’S FUTURE. Arrive no later than 6:30pm to be sure to get a seat. Check to be sure that the meeting agendas haven’t changed.

Reading a paper copy of this? Details, links, and supporting information are available on our blog site: NoFrackingBucks.com.